A Central Bank Digital Currency (CBDC) is a term you may have heard more often over the past couple of years and taken little notice of. Who can blame you? You already use a central banks currency (eg. $£€) and the only time you’re not using a digital version of it is when using physical cash as banknotes or coins which, if you’re being honest, you’re using less and less of because of the ease of use of credit and debit cards, NFC payments, online shopping, etc. Even if banks don’t like the cost of dealing with cash and are happy to champion its demise, it’s a consumer driven trend and we’re seeing more retailers not accepting cash, propelled by Covid19 as well, so spending and accounting for money digitally is nothing new to most people.

You interact with your money in your bank, in theory you can do what you want with it, although often we’ve all run into banks triple checking our transfers to Bitcoin exchanges. This is often due to the large amount of scams in the ‘crypto’ sphere which their customers fall prey to and their overzealous AML checks, but in general you can do what you want with your money or at least withdraw the cash to spend how you want. It is far from perfect though.

A CBDC differs, technically you wouldn’t need one of the many bank apps/cards/accounts to manage, receive and spend it, although we would expect them to integrate with retail banks to begin with and its value to be pegged 1:1 with the existing currency. Everyone in the country could use the new CBDC, which we’ll call £BritCoin using the main mobile wallet app for it, created and offered by the Bank of England (BoE) central bank called NoReserve Wallet. Retail banks should be scared because as this progresses their relevance diminishes, for example where do you think most people will believe it’s safer to keep their CBDC: with Natwest, HSBC or with the top dog, the central bank?

Due to the partnership between the government and the central bank you can assume that the government in charge will exploit this new CBDC super power for maximum benefit to themselves over time.

What’s the worst that could happen?

A CBDC can be viewed as programmable money, so there are many things it can be programmed to do, the list of bad ‘things’ could be pretty much endless but here’s a few examples of BritCoin in operation:

Whilst all of this is going on, the data being collected about everything you spend your money on is like manna from heaven to assist them in managing you, the citizen, better, most likely under the guise of it ‘all being for your own good’. These clauses on how you spend your money will not be introduced to begin with, it will be a slow creep of extra powers, mirroring the nefarious way over many years that the central banks established themselves and took over control of our money.

Although this is all in response to Bitcoins birth and continued growth, a CBDC bears little resemblance to Bitcoin and the main point of its underlying blockchain. Namely it being decentralised with no single point of failure and its censorship resistance whereas a CBDC will be on a centralised and censorable private or permissioned blockchain, which is not what a blockchain is designed for. The use of one here is to appear to be ‘like’ Bitcoin using smoke and mirrors. You can learn more about what makes Bitcoin unique in our recent ‘Why Bitcoin Only?’ blog. 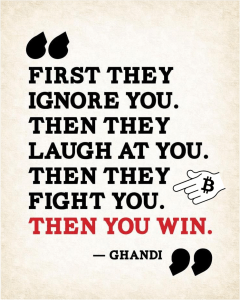 CBDCs are already being sold to the public as ‘stablecoins’, supposedly offering the benefits of a cryptocurrency like Bitcoin but without the price volatility, whilst neglecting to mention the incredible power it gives them over us and not solving the problem they’ve created of the continual dilution and subsequent devaluation of our existing central bank currencies.

An unintended consequence of introducing the public at large to BritCoin and the NoReserve Wallet capable of making peer-to-peer transactions and simplifying payments may be that it ends up familiarising the population with the benefits of the technology and hopefully they become more aware of the risks and drawbacks to it and search for a more appropriate solution to the growing problem of state controlled money and of course that path leads to Bitcoin.

Central banks are working on their own CBDCs, many of them, including the BoE work with the Bank for International Settlements (BIS) which is the central bank for central banks and is owned by the central banks. Are you starting to see what’s going on here? They are happy to spell out the control over you that they seek:

Another warning sign that we should be incredibly wary of CBDCs being introduced is that the biggest advocate for a CBDC and the country furthest down the path of introducing one is China. The Chinese Communist Party have realised the incredible value to them of this new tool for controlling their population and cementing their power. Thankfully so far, as a government initiative it has proven to be an inferior product to the existing private payment networks that are so prevalent there, so hasn’t gotten off to the best start.

Previously governments alongside central banks, have mainly had the power and influence to print unending amounts of money and this has proven bad enough but a CBDC will make this even easier for them and importantly they will know where every penny is and be able to control its use.

Bitcoin: the genie is already out of the lamp

A CBDC is a late reactive attack to Bitcoins existence. It not only doesn’t solve any of the real problems Bitcoin was created for, but exacerbates them and introduces an extreme amount of new, potentially catastrophic problems for any society that values freedom, privacy and the right to truly own your own money.

As dystopian as the worst CBDC implementation sounds there would be little hope or opportunity of peacefully pushing back if there was no alternative form of money, thankfully there is, it’s called Bitcoin and you can start your Bitcoin savings plan today at FastBitcoins.