Bitcoiners are more than happy to share the orange pill with people curious about magic internet money, but the conversation often ends in a way that’s uncomfortable for many of us…

It’s the same as asking someone how much they have in their bank account, but perhaps a bit worse because we know that Bitcoin is volatile, so things can change fast in terms of its fiat value.

It’s not a case of people being rude either (even though it is rude) – everyone I’ve spoken to, from family to relative strangers, asks the same question.

I tend to agree with Jameson Lopp on this point:

Nothing good can come of it.

But that doesn’t stop people from asking, even when you’re out in bigger social groups.

The perception of anyone talking about Bitcoin seriously still seems to be that you wouldn’t be here if you didn’t ‘get in early’ – they often assume that you must be sitting on piles of coins.

The truth is, even if you got involved in Bitcoin last week, you are still very, VERY early; yet another reason you should be cautious. If your Bitcoin value went up 20x, would you be comfortable with people knowing how much you had?

Ok, so we’ve decided we won’t be sharing how much Bitcoin we have… how can we respond?

– Deflect and quickly change the subject

Pretend you missed what they said and just keep talking about whatever tangent you were on previously. This is easier if you’re with more people in a social environment as there are added distractions. It must seem natural, though; if it seems like you’re avoiding the question, it probably has the opposite effect of what you intended (people might think you’re Scrooge McBitcoin).

This response illuminates that the question is rude, but note that it should be done in a jibing manner – joke that you’ll show them your finances when they show you a screenshot of their bank account. Keep it light and then keep the original conversation flowing.

Make a joke… about the joke. Tell the person about the joke and link it to another subject, such as how you can make Bitcoin relatively unconfiscatable. Remember that lots of people really do lose their Bitcoin through trading and silly mistakes, so that’s always an option. Tie it into a lesson.

When people ask you this question they have an image of someone who got rich off Bitcoin and bought their Lambo. Joke and dispel this as a myth. You didn’t get in early. You’ve just been saving small amounts and think it’s interesting… you’re in it for the ‘tech’.

Tell the story and move away from the direct response. Perhaps you learned about the effects of inflation recently and have been humbly stacking sats occasionally. You want them to view this as alternative savings and get away from the ‘wen moon’ viewpoint.

The response depends on the situation, but I’ve always found it’s better to deflect and keep it light.

Just don’t forget that it doesn’t matter how much Bitcoin you’ve bought if you don’t own the private keys. 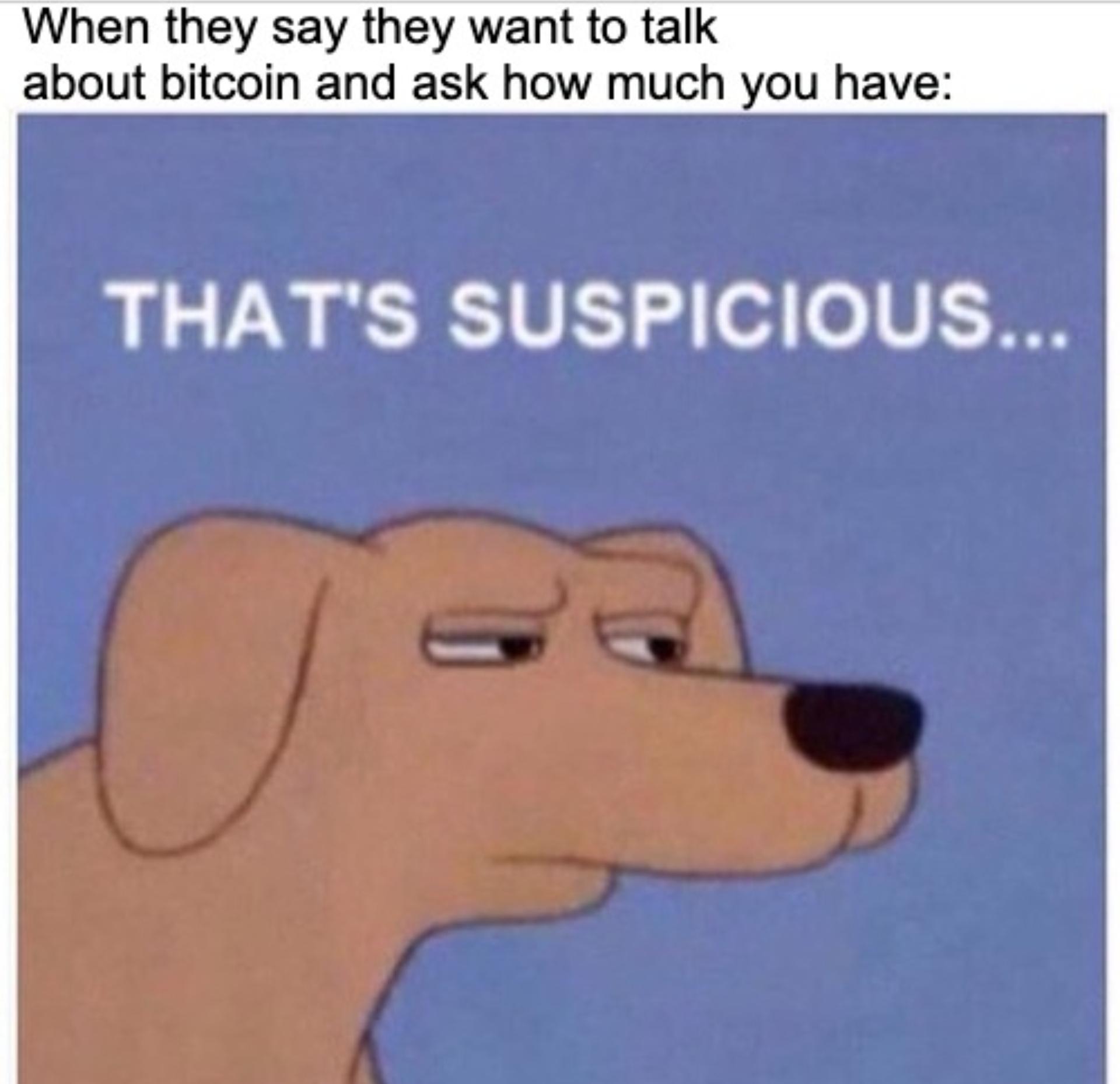