Very occasionally you read a book that answers so many questions, questions you didn’t even fully realise you had. But how is that possible? The questions are things you’ve thought about often but maybe have had no answer for and assumed it’s the status quo, it is what it is.

Maybe as a Bitcoiner you know the answers to these are all bad and you know FIAT money is the root cause, but do you know the full story about how we got here, beyond it being the central banks and politicians fault? 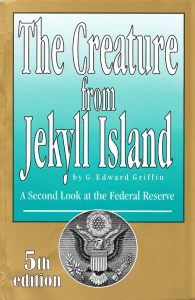 How did we end up in this situation?

The much acclaimed The Creature from Jekyll Island by G Edward Griffin goes a very long way in explaining our route here. According to Griffin that route was not something that evolved naturally and organically through market forces and the desires of the people but through a small organised cabal of the wealthiest bankers, just six to be precise, when they met and planned to create the US Federal Reserve, with them ultimately succeeding in 1913. That secret meeting took place at the private resort of J.P. Morgan on Jekyll Island, Georgia, USA in 1910 and those that attended were:

There doesn’t seem like much banking diversity here, which gets worse when Griffin explains a widely held theory about how, due to anti-semitic and anti-Rothschild sentiment in the USA and Europe at the time in the 1850s, the Rothschilds used J.P. Morgan & Company as cover for their own activities, which could explain JPMs meteoric rise over London and Wall St up until this day. Now known as JPMorgan Chase, it is the fifth largest bank in the world, with the proceeding four banks all being state run Chinese banks. 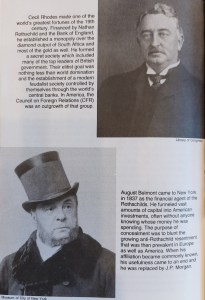 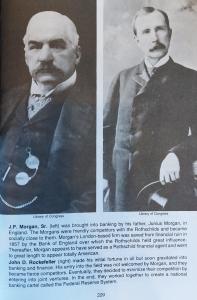 What emerged from the meeting was a cartel agreement with five objectives for a new US central bank called the Federal Reserve, which was neither Federal or held any real reserves:

Most of us have heard of fractional reserve banking but it is fascinating to read Griffins description of how the bankers with politicians eventually, after many attempts managed to remove all precious metal backing from money, allowing them to operate as full fractional reserve banks thus beginning the boom and bust market cycles that we have become used to. When you can create money from nothing for the purpose of lending the important thing for the bankers is to keep the interest payments coming in, if you pay off the capital then the money disappears and they can’t make money from you. This goes a long way to explain why the status quo these days is enormous sovereign debt and ever growing consumer debt and refinancing.

Griffin further explains that the US Constitution forbade the creation of paper money with no backing. The bitter experience of the American colonies with FIAT money meant the Founding Fathers knew what a huge risk that would be. The government’s role was initially limited to borrowing money, coining money (stamping metal), regulating the value of coinage, fixing the standard for weights and measures and providing for the punishment of counterfeiting and was expressly not to ‘emit bills of credit’ which meant the printing of paper IOUs not backed by silver or gold, yet here we are, the bankers have without doubt managed to usurp the US Constitution. 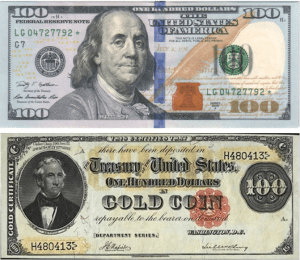 The mentioned objectives have all been achieved thoroughly and now through US controlled institutions such as the International Monetary Fund (IMF) and the World Bank these objectives have now spread across the world under the guise of assisting, in particular, developing nations through loans used primarily to perpetuate the control by petty tyrants and their ruling parties, keeping them in power whilst hooked up to the source of easy money and becoming beholden to the world central bank, the IMF. If Griffin is to be believed, the aim here is for a one world government, with its own central bank and its own currency and he certainly paints a convincing picture of the process we can all see being used to achieve that with the continual refinancing of unaffordable IMF loans around the world as an example.

A one world government?

Yes, Griffin expands further into who is behind all this and how they have achieved their success so far. It began with a secret society created in 1891 by Cecil Rhodes and the British establishment, Rhodes being one of the world’s wealthiest men at the time and with one of the other eight members being Lord Rothschild alongside another three Lords and a Sir. The purpose of the group was nothing less than world dominion and the establishment of a modern feudalist society controlled by the world’s central banks. 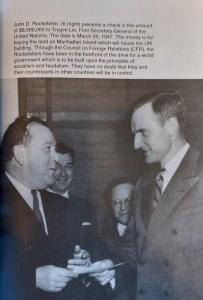 This was the top of the network with it expanding out into different layers including the Fabian Society, which even today is incredibly active and influential in the UKs Labour party with its current leader, Keir Starmer MP being a member of the Fabian Society executive. Interestingly the Fabian Society derived its name from the Roman general Quintus Fabius, known as Cunctator from his strategy of delaying his attacks on the invading Carthaginians until the right moment. The name Fabian Society was explained in the first Fabian pamphlet which carried the note.

“For the right moment you must wait, as Fabius did most patiently, when warring against Hannibal, though many censured his delays; but when the time comes you must strike hard, as Fabius did, or your waiting will be in vain, and fruitless.”

Griffin asserts throughout the book that a long game is being played and when you learn the origin of the Fabian Societies name it certainly does make you wonder if ‘they’ are still waiting patiently, history and contemporary evidence around the world indicates they could be.

How does Bitcoin fit in?

It’s really simple, those five objectives the cartel created at Jekyll Island and went on to successfully implement can be undone, for the first time in history, without the approval or permission of politicians or bankers, the people can take back control of the money with Bitcoin.

It’s no coincidence that the message Satoshi left in the Genesis block was:

‘The Times 03/Jan/2009 Chancellor on brink of second bailout for banks.’ 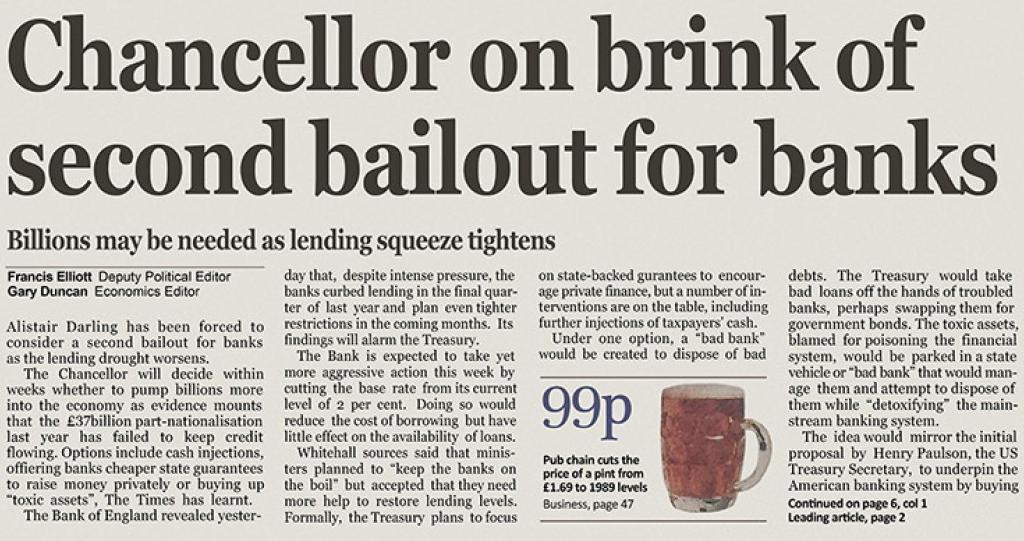 Bailouts and socialised losses are all part of the plan so expertly described here in The Creature from Jekyll Island.

So is it worth a read?

Yes, chances are this is no1 in our FastBitcoins Library, it’s a long read and not a page turner as such so not ideal as a first ‘Bitcoin related’ book but you do feel like you’re getting an onslaught of insight into the machinations that led us to where we are today and this review barely describes the tip of the iceberg when it comes to the information contained here.

For the answers to all of the questions at the beginning and much more, you will need to put in some POW as this is a must read for any Bitcoiner heading deep down the rabbit hole, alongside the rest of our guidebooks that can be found in the Fastbitcoins Library.