Bitcoin is huge already, right? I mean, just look at how much its price has increased in the past decade! Well, sure, its value has increased a bunch since its inception, but when you start at zero, any increase leaves you infinitely bigger, so of course, Bitcoin feels huge to most people already… but that was true when it was £5, and it’s still true at £14,000. So, how big is big? 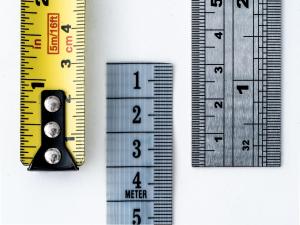 It doesn’t always make sense to measure the size of something in humans, so we create rulers… standardised measurements, such as centimetres, meters etc., to describe them instead. Money is one of these rulers, but instead of standardising the quantification of physical size, it standardises the quantification of value. However, there’s a key difference: inches are infinite, and money is not—at least real money, such as Bitcoin. When you quantify something that’s theoretically infinite—value—against something finite—money—the finite measurement must expand and contract to accommodate the totality of all that is being measured against it. For instance, if the size of a seven-inch sunflower grows by three inches, there is no shortage of inches by which to measure its new size. Conversely, suppose the supply of all the money in the world is £10, and all the value in the world is held in ten apples (so the £10 is worth ten apples). In that case, as soon as another apple grows, the value of that £10 must now be worth eleven apples; you cannot simply add more pounds in the same way you can add more inches, so you must stretch them instead. Bitcoin is money. However, it is only accommodating a portion of global value for the same reason that it once accommodated zero value at all: people haven’t caught on. 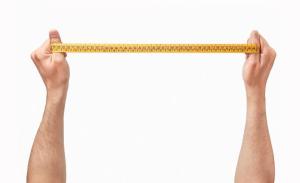 If the world used only one form of money, by definition, that form of money would have to account for all the value in the world. It sounds funny, but it’s the logical equivalent of saying, “If you create only one tool to measure x, it must be able to measure x.” But there’s not only one tool to measure value; there are many. Each country has its own, roughly speaking, and they are all divisible by different amounts. In the same way that meter-long rulers are divisible into 100 centimetres and foot-long rulers are divisible into 12 inches, the US dollar is divisible into trillions of dollars, etc. Instead of thinking of these individual currency units as objects as the form of money, consider the entirety of all units as the money itself and the individual units as ‘markers’ along the money, like centimetres along a ruler. This way, we can see that there are many forms of money competing for value, with the US dollar currently being well in the lead. (Side note: this makes it easier to understand how silly inflation is; adding more markers to a meter-long ruler won’t increase the ruler’s length just because you named them centimetres. They simply are not.) As these various forms of money grow in value, they account for larger and larger shares of the world’s value, and they’ve been at it for quite some time. Bitcoin, however, has only existed for 14 years and has had much less time to establish itself. So, how much value does the entirety of Bitcoin account for today? About the same amount of value as 328 billion dollars would. For some comparison, global GDP for 2021 (yearly value production) was 96 trillion US dollars. For some size comparison, this is the total Bitcoin value stood next to annual value production: 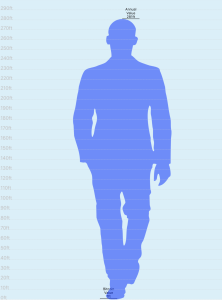 If you look at the toe of the big blue dude, you’ll see a tiny little person. That’s Bitcoin. Okay, not literally, but you get the picture. Because Bitcoin is borderless, it’s not playing in the same court as most national currencies. Bitcoin isn’t coming for Sweden’s value, Germany’s, or Japan’s; it’s coming for all of it. When you put Bitcoin in the context of its price history, of course it looks huge. Anything that started from zero would. But when you put Bitcoin on the stage it’s set to play in—as global money—it is quite literally the size of an ant. You can barely even see it in the image above. 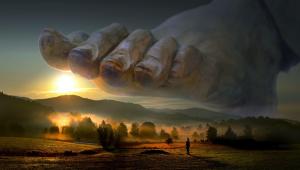 I think the question “How big can Bitcoin get?” comes down to framing. If you see Bitcoin as a technology startup that’s gone from zero to £14,000 per share in just 14 years or as a new competitive form of global money… and if you know anything about Bitcoin at all, you’ll know that the former makes absolutely no sense at all, and you can make a very strong case for the latter. Bitcoin is not a tech company. It’s not a legal entity. It has no CEO, it pays no dividends, and there’s nobody on earth who could single-handedly screw it up; this is never the case for startups. Bitcoin may be a new competitive form of global money; it is the properties of money expressed through code, and it’s showing no signs of failure. So, just take a look at the image above, and you’ll get a rough idea of Bitcoin’s potential for growth.

If you liked this article, check out our blog for more!