If you haven’t already figured out the answer to this then chances are you’re still enamoured by the exciting promises of crypto and blockchain. Don’t blame yourself, most of us have been there and painfully learnt the lessons, often called the ‘entry fee’.

Whether it be the thought of the benefits brought to the world from using a decentralised blockchain to help track and authenticate luxury products or a smart contract world computer that will decentralise everything or the best benefit that most altcoins sell: the better money than Bitcoin angle, they all share one thing in common, they’re not decentralised.

You will have been inundated with sales and marketing from these blockchains and their communities as well as the exchanges that profit handsomely from listing every random blockchain coin under the sun regardless of their actual utility, if any at all. They just want you trading regularly, incentivising you to do so with competitions, 1500%  ‘yield’ on the new coin of the month or free NFTs (jpeg). You’re the real yield, that’s why they advertise during the superbowl or just buy and rename the stadium themselves, they need to entice you into the bucket shop and keep you trading.

As mentioned the most prominent sales pitch will be that the coin is better money than Bitcoin, and altcoin marketeers have a plethora of reasons to convince you; it’s quicker to send, transaction fees are lower, it doesn’t pollute the environment, it’s more private, the coins were more equally distributed, it’s a stable coin, it was created by academics, the banks use it, the community (bag holders) are the best, Bitcoin’s old tech, or the best one: it has a cute dog as its logo.

Due to the never ending list of reasons from the almost 19,000+ altcoins, it becomes an almost impossible task to explain why each one is wrong. The best approach you can take is to fully understand Bitcoin first. This does take time but eventually leaves you better equipped to come to the same conclusions as most other Bitcoiners who have been around a while: altcoins are noise, Bitcoin is the signal. You can check out the FastBitcoins library to start heading down the Bitcoin rabbit hole. 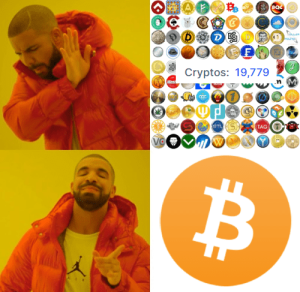 None of these coins can deliver what Bitcoin can, mainly due to its design but also due to its immaculate conception. The genie is out of the box and it’s impossible to replicate Bitcoins birth now and create anything remotely like a fair distribution. Bitcoin was anonymously launched publicly and fairly at a time when very few cared and has grown organically now for over 12 years with no centralised entities controlling it and no marketing department selling it. Trying to replicate this now, fairly, when everyone knows what to expect, completely distorts the creation of any new altcoin.

So what can Bitcoin actually deliver?

Bitcoin is essential for freedom as it’s the first tool that will allow us to separate money and state. That can seem like a lofty objective, which we imagine is the same way many thought about the separation of church and state, yet the majority of us now live as we would expect, in secular societies and it makes perfect sense with hindsight.

Currently the US Dollar is the global reserve currency, referred to as the ‘Privilege Exorbitant’, the name says it all really, it is an exorbitant privilege to have the global reserve currency as your currency, not only can you steal from your population through money printing inflation but you can also export that same nefarious tool to a global stage. No one, if presented with the options, would choose to have any one country in the world holding this power but we’ve had no choice, that is until Bitcoin came along.

States and the Central Banks are not going to want to be separated from the money so it is vitally important that the tool required to do it is decentralised, resulting in censorship resistance. This means that at a basic level they cannot control or influence it, they cannot stop citizens from using it, they cannot debase it through endless inflation as they’ve done with their own currencies. They will try, they will regulate the legacy financial systems interactions with Bitcoin to try to make it as hard as possible, increasing their efforts as the writing on the wall becomes plainer for everyone to read: that they cannot alter Bitcoins trajectory. They can only try to slow it down in the same way you would try and push a boulder uphill, unsuccessfully. 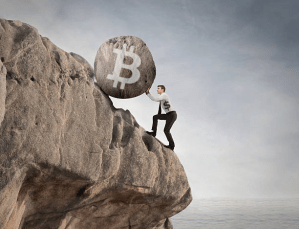 It can be argued that altcoins in general also slow down the growth of Bitcoin as they distort the understanding of what Bitcoin is and lead many newcomers to the space down the wrong path. One of the problems that Bitcoin fixes is not requiring different currencies around the world, removing friction by having a fair global standard; that problem doesn’t get fixed by replacing the existing ~180 government currencies in the world today with 19,000+ digital currencies tomorrow.

So the aim of the game is to have Bitcoin as the new dominant world currency, open to everyone but controlled by no one. Gold put in a valiant effort trying and did so successfully for many years but in the end due to its centralised nature and ease of confiscation it lost the fight but we have a better alternative now, one set for a digital world, it’s called Bitcoin and everyone will gravitate to the best money because it simply makes the most sense.

Learn about Bitcoin to save yourself the time of having to learn about the 19,000+ altcoins and save your money today at FastBitcoins.